Produce clean energy, investing in a chain to popular action, to be able to sell freely on the market. This is the purpose of Retenergie, a cooperative founded in Cuneo in 2008 and today has nearly 400 members, following the appeal on the internet by Marco Mariano, at the time the owner of an agricultural producer of beans, to find people from involved in the construction of the first photovoltaic system to popular action. An initiative called “Adopt a kilowatt of clean energy,” which quickly gathered a consensus so wide as to be able to build a photovoltaic system at Mondovi on the roof of an enterprise of waste and management of public parks, and unleashed a true their collective energy and action. 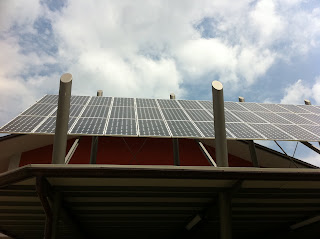 IN THREE REGIONS – In fact the cooperative Mariano in just three years has reached a capital of 450 thousand euros and already counts among its five owned photovoltaic systems connected to the network of Piedmont, Emilia Romagna and Lombardy for a total of one hundred kW of installed capacity. Not to mention the mini-hydropower: 170 000 kWh, which will accrue to between six months when the plants will go into business. “Our goal,” says president Mark Retenergie Mariano, “is to be able to produce, by the end of 2012, at least 500 000 kWh. And, to make it more attractive to economic investment in the cooperative, to be able to become, within four years, suppliers of energy we produce.Without being forced, as we do now, to sell to the State and to lean on outside companies for the supply to households. And, to be able to close the circuit of clean energy, we need to find at least 6 000 potential customers and build, in these four years, an adequate number of facilities, including electrical and foltovoltaico, to satisfy them. “

DEMOCRATIC ENERGY – To form a virtuous circle, in the three years of the cooperative, almost 400 members, according to data reported on the site. Locally organized regional groups that meet every six months in a large popular assembly, distributed throughout the boot to find sites where you can develop power plants, and located mostly in northern and central Italy and abroad as a member Italian transplanted in Switzerland and two French sympathizers. All gathered in a heterogeneous society in which there are students, professionals, employees and university professors. Including, also a professor of mitigation of climate change at the Politecnico of Milan Stephen Caserini. “The cooperative system,” says Caserini, “is a formula used to mobilize the necessary change in energy, imposed by the narrowness of the current system that relies on fossil fuels such as gas, coal and oil. Resources, “says the professor,” not only highly polluting, but also destined to dry up over time. For this reason, it seemed like a good investment to rely on a cooperative and transparent as the one serious set up by Mariano, perfectly in line with the spirit of macropolicies economic energy savings. “

ALTERNATIVE ECONOMY – Several ways to become part of Retenergie. Subscriptions can be made directly on the site and joins the popular shareholder proposed by the cooperative. By direct participation, with a minimum membership fee of 550 euros for the investor untouchable for at least ten years, which enables those who do not have the chance to build a plant to become co-own the cooperative and those to divide the profits at year end. “Since January 2012,” reveals Mariano, “also will open the way for social lending, re-evaluating the money we will be made available with a fixed interest rate of 3%.” Or, with adhesion of 50 euros, which provides for this type of shareholders other than energy services including consulting for the energy certification of buildings and redevelopment.

CLEAN ENERGY ETHICS – To achieve the clean energy sector, however, the cooperative has also given the rules in a code of ethics drawn up by the same shareholders, all of which provide directions on how facilities should be made. Precise, not only for energy production but also for the preservation of the planet. “For example,” says Mariano, “for what it regards as photovoltaic systems we are absolutely opposed to the ground because we believe that the land should be used for other purposes and not for energy. Moreover, there are so many roofs available and then we work on those, trying to rent them for twenty years. Sometimes, even managing to pay the surface rights, in exchange for the work we do on energy. Or, “Mariano concludes,” for the hydroelectric power plants we intend to put on only manmade sites already, without any intervention on waterways providing new pipes. For this reason we only work on irrigation canals, aqueducts and artefacts existing only to support us where we are going to enforce our production facilities. “