The Passive House (Passivhaus in accordance with the original German term, passive house in English) is a home that provides thermal comfort without heating “conventional”, ie boiler and radiators, or similar systems.

The house is called passive because the sum of the passive heat inputs of solar radiation transmitted through the windows and the heat generated internally by the building occupants and the appliances themselves are almost enough to offset losses envelope during the cold season. This type of construction is generally made ​​of wood structure, which is a natural insulator. 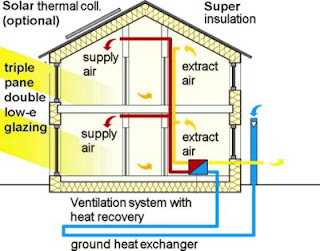 The energy needed to balance the heat of the building is typically provided with non-conventional systems (eg solar panels or heat pump to heat the air of the ventilation controlled energy recovery).

The conventional heating system can be eliminated if the energy needs of the house is very low, conventionally less than 15 kWh per square meter per year.

These benefits are achieved with very careful planning, especially in regard to the sun, with the adoption of high performance thermal insulation of external walls, roof and glass surfaces and through the adoption of controlled ventilation systems for energy recovery.

The passive house concept was born in May 1998 from the collaboration between Bo Adamson of Lund University in Sweden of the university, Dr. Wolfgang Feist and German.

Their concept was developed through a series of research projects funded in part by the German state Hessen. The first passive house in Germany was built in 1991 in Darmstadt-Kranichstein by Dr. Wolfgang Feist.

The energy requirements of 4 terraced houses amounted on average to 10 kWh/m2a and has remained stable for 15 years. The first German passive house multi-family is located in Freiburg (1999). Followed by a residential complex of 21 houses in Wiesbaden, 32 homes and 52 homes Hanover-Kronsberg in Stuttgart. Between the years 1999-2001 have been built through the Cepheus complex additional 221 locations in 14 ‘in 5 EU countries: Germany, Sweden, France, Switzerland and Austria).

All construction and measurements were controlled fully respected expectations. At this moment the most ‘big passive construction (German) is located in Ulm and is called Energon (2002). The first passive house in the United States was built in 2006 in Bemidji, Minnesota for the “Deutsch-als-Fremdsprache Waldsee-Programm”.

The project Waldsse been possible with the help of the German Environment Foundation and funded by several German companies. In Italy, the first public building in the ex post target passive house is designed by the architect in Bolzano. Tribus Michael in 2004. This adaptation of the former post office building in place for the offices of the Autonomous Province of Bolzano. The building has a volume of 20,000 m³ and the consumption is 7 kWh / m². Corresponds to less than one liter of fuel oil per square meter per year.